My job is to code for the web (mostly), but I have always dreamt to create games, and thought that this was too different or too hard for me to do properly, until I changed my mind very recently.

I first learnt about Game Jams via a friend (@speedyiop) that was in an association called Game Dev Party that hosts "themed" jams in Lyon twice a year. Rules vary but a Game Jam is generally about making a game in a very short time (48h), and is mostly about spending a good time with great peoples making cool stuff and not sleeping very much.

My very first jam was a "shy" jam. I don't quite remember how or why I joined them, but all the team members already knew each others and I joined as "Sound Designer". Of course my knowledge of Sound Design is really limited but I know how to record and mix a song, so I went there with my electric guitar and a keyboard, and managed to record a crappy music for the game and some sound effects (I guess, I don't really remember).

P.R.Out (for Project Revenge Out, but it's also the sound of a fart in French, I'm not responsible for this 😐) was a really ambitious concept, it was an asymetrical shooter where one player was the ship shooting, playing against the other player that built the level in real time, the ship and the level were shown as words using typography (classy typos for the ship and goofy Comic Sans MS for the level). The client was made with Canvas and WebSocket, and they used a C server to communicate.

Back then most games in jams were made using JavaScript without any real framework, Unity was not as polished as it is today so obviously most people could not make very impressive games in a week-end with a fully hand made engine.

More info on the game can be found on a presentation of the project on the Game Dev Party's blog (in French). Unfortunately I could not find any screenshot, video or build to show you.

3 years later I've decided to come back, but this time I've took the time to learn Unity (did a few tutorials and read the doc, it's not that hard you should try it)! The theme was "Kaïju" (Godzilla-ish monsters in Japanese culture), we were two coders and two graphists on this one, small but cool team. I also did some Sound Design (all the sounds made with my mouth). The project was a runner on mobile, you are a cute monster rampaging the city, the monster walks forward and you control jumps and strikes with touches and swipes and try to avoid or crush hazards. The game is ULTRA HARDCORE, I dare you to try it and finish the level (no one on the team could do it). More info and downloads on the gamedevparty blog.

It was a really cool experience, I learnt a lot and it was pleasant to make a game that we could actually enjoy playing after only 48 hours of work. You can find the sources on github. 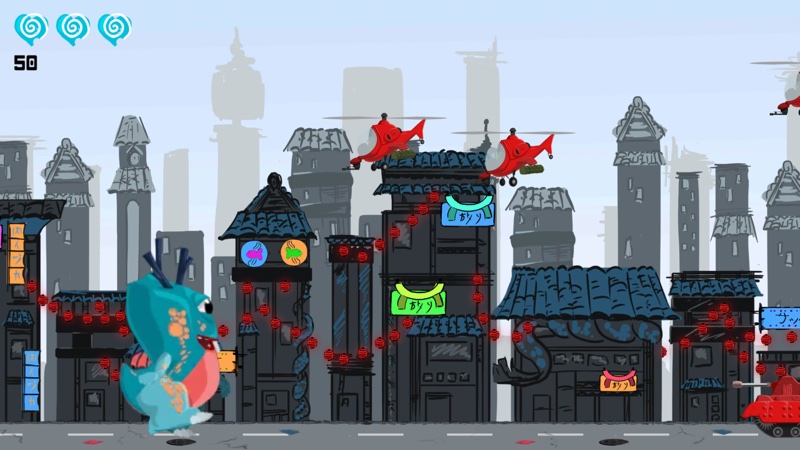 There's so many jams that you could spend your life jamming. So here I am, one month later, trying to make a 3D game on Oculus Rift with a dude I met in the Game Dev Party, @kezhaar. It was a bit weird because we were only two on the project and we were working remotely at our respective homes. I did all the coding (and testing with Oculus) and Kezhaar did all the level design (it's 90% of the job on this project) and music.

The concept is really great, and it's too bad we did not polished it anymore after the jam. Theme of the jam was "Two Button Controls": you are dropped on top of a really complex maze acting like a Rubik's cube, and you have to find the control panels to rotate the level and find the path to the end of the level. I never finished it but I know Khezaar's record is under 15 minute knowing the route by heart! Also I wanted to puke after playing too much with the Oculus so yes: your code can literally make you puke. You can find more on the ludum dare entry page (you can, and should, play it without Oculus), sources are also on github.

Back in a jam in Lyon, with a huge team of 8 members (!). This time it's my idea, I wanted to make a multiplayer game where people are supposed to put their smartphone on the table, forming a tabletop game with phones. You just have to send the creeps summoned by your culists (theme was "Ritual" by the way) to battle the other players, 3 kind of creeps like Rock, Paper, Scissors and 5 cultists representing your health.

Making a multiplayer game in 48h is ultra hard, but we still had something to show in the end so we were really happy with the result even if it was really buggy.

You can find more about it in the global game jam entry.

This last jam is a challenge I gave myself. I've been studying art online a bit, bought a little graphic tablet and worked on some pixel art. The goal this time was to participate in the "Compo" of Ludum Dare, it's a category for the jam where you have to do EVERYTHING all by yourself (no team) under 48h. Unfortunately I was too short on the deadline so I had to get another 24 hour to finish the game and submited it in the "Jam" category (less restrictions and 72h), but I'm still very proud to have made the code, arts and sound design by myself!

The theme for this jam was "Shapeshift" and I finally went for "Phat Fishes" which is an anagram for shapeshift, the games is a couch multiplayer party game where each player is a fugu fish (they shift shapes too) and have to bounce other players into dangerous stuff. You can play the game on itch.io in your browser or download the game for you PC or Mac. I've scored #83 out of 1594 in "humour" so it must not be that bad. Sources are on github. 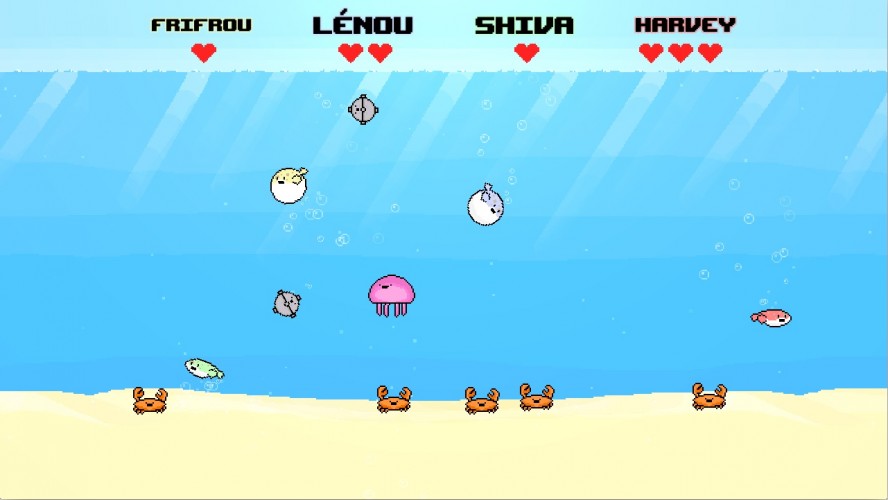 I've been enjoying game jams a lot, and I plan to do some more when I got the time. I also encourage you to try it, it's fun and really easy to start now that there is easy game engines out there like Unity (and others). I'd like to start working on a more polished game, all by myself, maybe I'll talk a bit about it on this blog if I don't give up too soon. Until then, you can follow my humble twitter account about gamedev: @tentacode_. 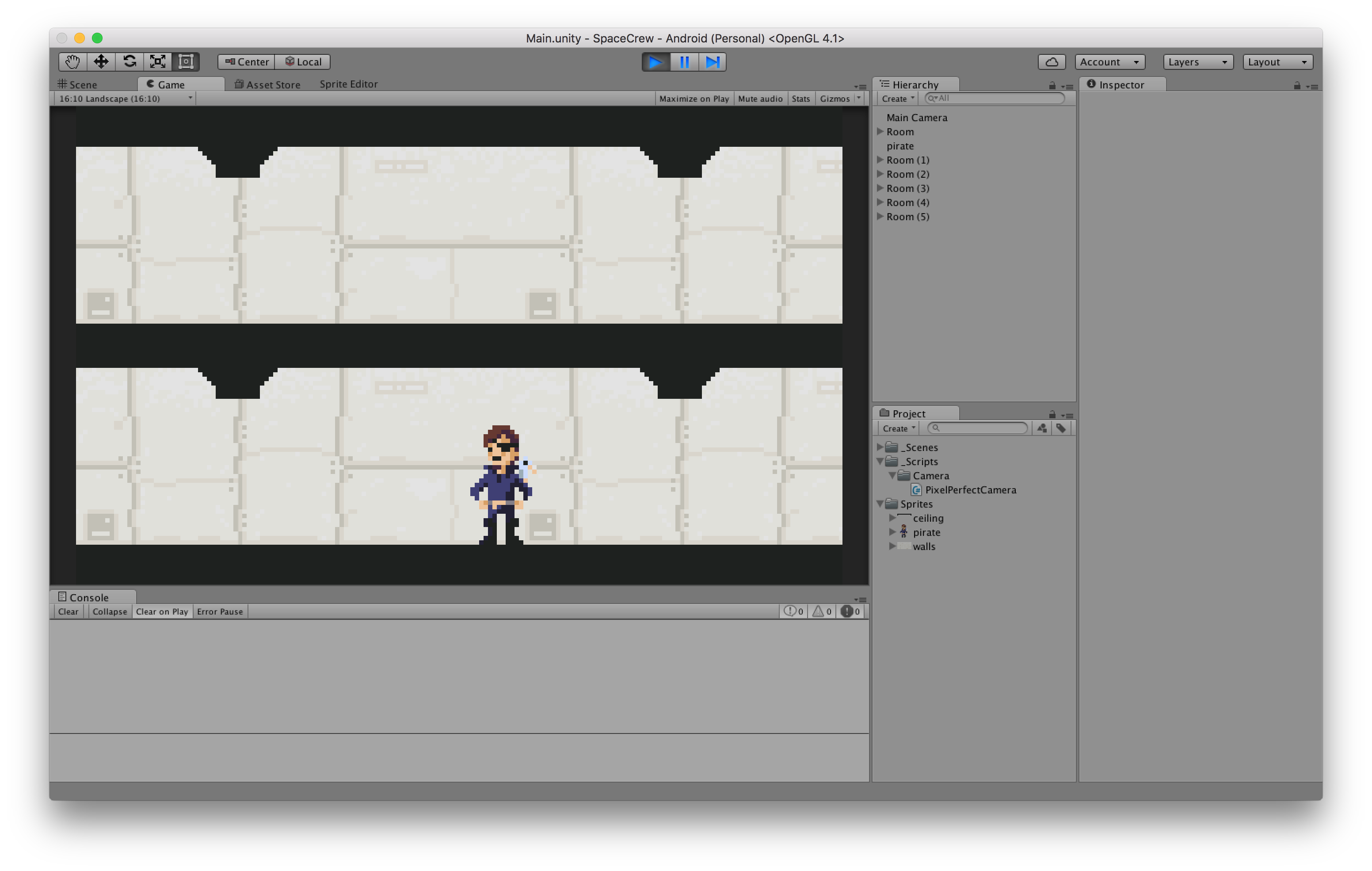 (My next game might have space pirates in it)

If you scrolled this far, that means you enjoyed this post.